On January 13, 1920, Piero Farulli was born in Florence, Italy, to a working-class family. He was the fifth of seven children. Piero learned to play the violin, thanks to the help of his godmother, Ida Beni, in whose store he helped out as a clerk and who paid for his private lessons until he started conservatory training at the age of fifteen. He obtained his diploma in violin, followed by a viola diploma in 1941, but just a few months after he passed his audition for the viola section of the Teatro Comunale, he was called to military service.

In 1947 he became a member of the Quartetto Italiano, an ensemble that had formed two years earlier but was already active and well-known. Over the next thirty years, the quartet honored Italy’s name with concerts throughout the world to enthusiastic audiences and reviews. Following their first performance in New York City, the famous critic, Virgil Thompson wrote in the New York Herald Tribune: “Perfection is the only word to describe this playing, perfection of a kind and degree that no living quartet lover, and no quartet player, has heard before!”

With the Quartetto Italiano, Farulli recorded Beethoven’s complete works for String Quartet, as well as the String Quartet repertoire of Mozart, Schumann, Brahms, and Webern. They also recorded many works of Schubert, Haydn, Ravel, and Debussy, along with the historic recording of the Verdi String Quartet. These recordings were of the highest caliber and made their mark worldwide as witnessed by various awards they received, such as the Grand Prix du Disque, Diapason d’Or, the Premio della Critica Discografica Italiana (Italian music critics’ award), and the 12° Prix Mondial du Disque de Montreux — the honorary diploma for contributions made to the art of the recording.

Piero Farulli’s music-making was inseparable from his ethics of living and thus he felt a moral obligation to bring great music to all social strata. In fact, during his life, he never ceased to put this philosophy into practice.

After the Quartetto disbanded, Farulli worked with the Amadeus Quartet, the Alban Berg Quartett, the Melos Quartet, and the Trio di Trieste. In 1983 he founded the Nuovo Quartetto together with Carlo Chiarappa, Andrea Tacchi and Andrea Nannoni.

After holding the position of Quartet teacher at the Accademia Chigiana of Siena, and founding the String Quartet School at the Fiesole Music School, he went on to create the European String Quartet Academy. Coming together with three eminent String Quartet specialists, Hatto Beyerle (Alban Berg Quartett, Austria) Norbert Brainin (Amadeus Quartet, London) and Milan Škampa (Smetana Quartet, Prague), Farulli laid down the basis for a true String Quartet University. In 1992 he was called by Paloma O’Shea to set up the String Quartet School in the first institution of advanced studies in Spain: the Reina Sofía School of Music in Madrid.

He was invited to be Gastprofessor of viola at the Mozarteum in Salzburg and held String Quartet workshops at the Lucerne and Lausanne conservatories.

Farulli was a Santa Cecilia academic, Grand Officer of Merit of the Italian Republic, and was honored with the Italian Gold Medal of Merit for Culture and Art, as well as the Knights Grand Cross of the Order of Merit of the Italian Republic. From the Queen of Spain, Farulli received the Yehudi Menuhin Award for the integration of Education and the Arts on the recommendation of the Reina Sofía School of Music in Madrid. He was honored with the H.W. Henze Award and the Fiorino d’Oro award in 1996 as “a luminous example of the trust a man of culture has placed in the civic value of music. Music, as a complete human experience, as a spiritual element of the individual.”

The extraordinary Golden Pegasus from the region of Tuscany was awarded to Farulli in 2001 for his “exceptional efforts as an artist, educator, and citizen.”

The Nino Carloni Foundation dedicated the first edition of their Career Award to him. In 2005 he received, on behalf of the Fiesole School of Music, the Special Award from the President of the [Italian] Republic, designated by the National Academy of Santa Cecilia in Rome.

But there was much more to Farulli’s life story than his profession as a violist. Rooted as no other in contemporary society, he had dimensions quite beyond his musical artistry, where he operated with untiring generosity and energy.

Music, a gift to be shared, a gift to give back to the world: this is how we can best describe Piero Farulli’s philosophy, his approach to music. Propelled by his political and civil ideals, he shared music unconditionally, from the ground up, through his teaching and through creating and organizing musical and cultural encounters. Mindful of what cultural heritage music has to offer both the individual and the entire society, Farulli created occasions for music to penetrate the confines of “official” cultural events. For instance, at the Fiesole Summer Festival, Farulli was the first to decentralize by organizing concerts in non-mainstream locations such as farmyards, churches, and local community centers.

He set in motion a serious dialogue with the just-opened European University, situated on the opposite hill from the school, and, invited by Professor Bernardini, made a breakthrough entrance into the prestigious university-level school, the Scuola Normale Superiore di Pisa, setting up a choir of students and teachers dedicated to Bach cantatas, a string quartet in residence, a year-long course of music appreciation, and a bona fide concert season at Pisa’s Teatro Verdi.

During this same period, Farulli, together with a group of musicians and intellectuals — with Dallapiccola and Massimo Mila leading the way — formed the “Music and Culture” Council as a permanent institution in 1966. By means of a series of conventions in Fiesole and through other efforts to move public opinion and that of lawmakers, the Council strove to help music become an essential voice in Italy’s national culture. One aim was to include music in the curricula of schools of all kinds and at every level, in such a way as to repair the fracture between music and culture that had been typical in Italy.

In 1968, keenly aware of how isolated the life of a musician can be, Farulli cooperated with the Italian Musicians’ Union to foster the idea of collectivity in an environment that was naturally individualistic and indifferent to social responsibility.

Despite the one hundred concerts a year including strenuous worldwide tours with the Quartetto Italiano, despite the relentless recording sessions in Switzerland for Decca and subsequently Philips, and despite his intense teaching schedule at the Conservatory, a mission, in his view, where students, gifted and less gifted, were all like sons and daughters to him — despite all this, Farulli felt the urgent need to create a concrete pedagogical model in order to guarantee a visibility that the State would not be able to ignore.

In 1974, inspired by what the Music and Culture Council had accomplished, Farulli spearheaded his most brilliant project yet: The Fiesole School of Music. What went on to become Italy’s leading musical institution had its humble beginnings in two rooms of the old Fiesole Philharmonic.

Still today, at over forty years from its founding, the Fiesole School maintains its vocation as a cultural center open to everyone, making musical education available to aspiring musicians of all ages, to amateurs as well as young people well on their way to becoming professional musicians.

In 1980, within the walls of the Fiesole School, Farulli created the first national professional training course for orchestral musicians. This innovative system used chamber music as a way to learn the art of reciprocal listening, and as such, became an important stepping stone to the full orchestral experience. To achieve this, Farulli gathered together some of his fellow musician friends, all with brilliant careers behind them. Among them, two important names stand out: the Trio di Trieste and the mythical Giuseppe Prencipe, concertmaster of the Santa Cecilia orchestra.

As a natural outgrowth, the Italian Youth Orchestra was created in 1984. It was a model organism owing to its rigorous focus on education and training. It was not about orchestral instrumentalists, but about musicians making music together, as Claudio Abbado would say. All the greats have conducted this orchestra: from Muti to Abbado, from Giulini to Sinopoli, to Gatti, Ferro etc.

What a great debt we owe to this man who succeeded, with simplicity and iron determination, in conquering the inertia and indifference so prevalent with respect to this great heritage, and who, despite all marketing logic, was able to breathe life into a utopian dream, the best dream that any man or musician could imagine. 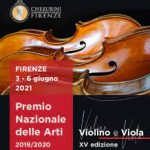 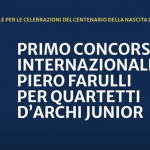